Winner of the womens’ marathon at the Olympics in Sydney 2000 and Athens 2004not only have gold medals in common but also their choice of drink, a concoction derived from the stomach juices of giant Asian hornets.
If they won Olympic golds on the stuff, think what it can do for your athletic performance. More “…The women’s marathon winner at the Sydney Olympics has revealed the secret of her success — she drank the stomach juices of giant, killer hornets that fly 100km a day at up to 25 km/hour. Naoko Takahashi, from Japan, consumed thehornet juice during training and the race itself after scientists discovered that it had astonishing powers to boost human stamina.”
New York Times, October 2000

Fast forward to 2004 when Japan’s Olympic Committee came in for criticism for not sending Naoko Takahashi to Athens to defend the marathon gold medal that she won at the Sydney Olympics. Instead Mizuki Noguchi was sent in her place, a decision no one can now dispute as Noguchi also won gold in the womens marathon at the Athens Olympics in 2004 . 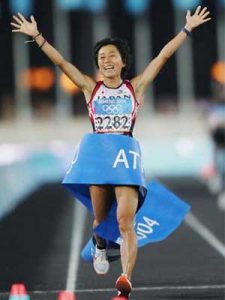 In the pre-race press conference in Athens, while other Olympic Marathon team members conceded that pre-race favourite Paula Radcliffe would control the race, Noguchi proclaimed, “I am going to break the race open.” As promised, Noguchi made her move at 25Km

In her next big competition since winning gold in Athens, Mizuki Noguchi won the Berlin Marathon on 25 September 2005, setting a new course record in a time of 2:19:12.

Following this, Noguchi won the 2007 Tokyo International Women’s Marathon, moving her a step closer to her goal of qualifying for the 2008 Beijing Olympics. More

Takahashi and Noguchi both attribute their Olympic marathon success to the incredible endurance that came from drinking the stomach juices of giant hornets.
Click here to see what Hornet Juice can do for your athletic performance?

“Sales of giant killer hornet juice are sure to soar following Naoko Takahashi record-setting run last weekend at the Berlin marathon. Thefirst woman to crack the two-hour, 20-minute barrier, Takahashi saidher success was fuelled by a drink made from the juice of Japanese killer hornets. According to the diminutive Japanese runner, who was racing in her first marathon since taking gold at the Sydney Olympics, the juice reduces muscle fatigue and improves the body’s efficiency by increasing the ability to metabolize fat and reduce the buildup of lactic acid. And best of all, hornet juicedoesn’t appear on any banned substance list.”
USAtoday.com
Back to Top

“Japan’s Olympic champion Naoko Takahashi has flatly denied that she was helped by a performance-enhancing substance when she set the world’s best marathon time in Berlin. Takahashi’s year-old comment that her success at the Sydney Olympics was partly due to drinking the stomach secretions of larval grubs of giant killer hornets…” More
BBC Sports “Olympic marathon champion Naoko Takahashi drank the stomach juices of giant killer hornets to give her performance an extra buzz, it has emerged. Ms Takahashi of Japan took the unusual beverage before and during the race after scientists found it boosted human stamina. The marathon runner has reportedly said the juice was “a crucial factor” in helping her win gold at last month’s Sydney games. Reports on Monday said that the drink, which is 100% natural, did not fall foul of Olympic laws against performance-enhancing drugs.” More
BBC News

“Japan Abuzz Over Hornet Saliva As High-Tech Sports Drink. Drinking hornet saliva may not sound particularly appealing, but it’s a $50 million a year business in Japan – and many here believe the insect fluid helped propel Olympic marathoner Naoko Takahashi to her gold medal victory at the Sydney Games in September.” Amino acids taken from the saliva of baby hornets improve physical endurance in humans, according to biochemist Takashi Abe, who developed the drink five years ago” More
Boston Globe

“In Japan, marathon runners and other endurance athletes are swilling a new sports drink which contains a liquid secreted by hornet larvae. In fact, 2000 Olympic Marathon gold medalist Naoko Takahashi claims the hornet juice contributed to her victory in Sydney. This bug juice, mostly a mixture of amino acids, is normally consumed by adult hornets, and, according to scientific researchers, gives these insects their great endurance and speed.”
RunnersWorld.com
Back to Top

“Japan’s Olympic champion Naoko Takahashi ran the fastest ever women’s marathon on Sunday as she broke the 2 hours 20 minutes barrier to win in Berlin. The 29-year-old’s winning time of 2hr 19mins 46secs was the first time a woman has dipped below 2hrs 20mins, a mark some have compared to the first four-minute mile.”More
BBC Sport 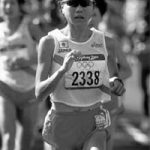 “Olympic women’s marathon champion Naoko Takahashi has been given a prestigious award by under-pressure Japanese prime minister Yoshiro Mori. The 28-year-old runner won the first athletics Olympic gold for Japanese women and has now become the 15th person to receive the People’s Honour Award since it began back in 1977.” More
BBC Sport

“Soon after Olympic women’s marathon champion Naoko Takahashi showed overwhelming strength to win the 2001 Berlin Marathon on Sept 30, the New York Times suggested she might have got some help from a peculiar drug. Almost two pages were devoted to the Oct 1 article by reporter Jere Longman who wrote: ‘Since the Sydney Olympics, Naoko Takahashi has been taking a concoction based on the secretion of hornet larvae.”
Shukan Post
Back to Top

“Takahashi doesn’t drink Gatorade or Powerade. Rather, she is loyal to a more peculiar elixir that she has called the crucial factor in her success. ‘It’s a sport drink made from a liquid that hornets produce. I’ve been drinking it for the last five years. It makes it possible to run far. Hornet juice enables athletes to give everything.”
Mt Holyoke News “Naoko Takahashi created a piece of Olympic history by becoming the first Japanese woman to win an Olympic track and field event as she took marathon gold in Sydney. The 28-year-old also set a new Olympic best time of two hours, 24 minutes 14 seconds” More
BBC Sport
Back to Top